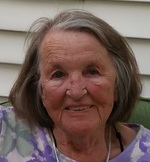 Wilhelmina (Willie) Hubertina Maria Gerada (Linders)Slot, widow of Johan (Hans) Albert Slot, passed peacefully in her sleep at Hartford Hospital on May 27th after a brief illness. She was 87. Born in Venlo, Holland in 1931, Willie was the youngest of 8 siblings. Over the years, she recounted numerous stories to her family of her life growing up in Holland, including her survival of the bombing of Venlo in World War II when she was a teen and the friends who were lost in that event. Her family were avid churchgoers, and her father was a photographer, establishing and owning Foto Kino Linders in 1911. Willie treasured her memories of times spent in the its dark room helping her father developing photos. She met Hans, a native of Indonesia and a survivor of Japanese internment camps located there, in Venlo following a field hockey game. Together, they emigrated from Holland to Australia, and married in August, 1952. It was in Australia where their first son, Johan, was born. They returned to Holland briefly in 1956, and immigrated to the United States in 1957, making their home initially in upstate New York and moving frequently as a result of Hans’ work throughout New York, Rhode Island, Massachusetts, and Manchester, Connecticut, where their son Paul was born, before finally settling in Branford, Connecticut. It was only several times over the years that she visited her family in Holland, although pining for ‘home’ throughout most of her life. She spent her final years in Glastonbury, Connecticut. In the late 1970s, Willie and Hans together opened Hans Slot, Dutch Importers in New York, and later, Precious Time, a Guilford, Connecticut gift shop specializing in high end clocks. Willie’s creative inspiration was always present in the displays, and many long hours through holidays found the two of them in the shop. Her Dutch accent endeared her to many loyal customers. Willie loved to cook, and to garden, and enjoyed long conversations with family overseas. Her recipes for bahmie and pound cake are treasured by her children and grandchildren, and it was a special meal whenever she was in the kitchen cooking. In her later years, her travels were limited and local, and she enjoyed many occasions at her sons’ homes, always with a story to share, her blue eyes glistening.
Predeceased by her parents and seven siblings, she is survived by her son John Slot and his fiancee Carla Destramp, her son Paul Slot and his wife Traci, five grandchildren - Liz (Slot) Matthews and her husband Ryan, Chris (Slot) Brown and her husband Darnell, Ryan Slot, Collin Slot, and Kyle Slot, as well as Jess Destramp and CJ Destramp, and 31 nieces and nephews in the United States and Europe.
A memorial service will be held at 10:00am on Saturday August 3, 2019 at The Farley-Sullivan Funeral Home, 50 Naubuc Ave. Glastonbury . To extend condolences, or for further information, please visit www.Farleysullivan.com.

All rights reserved. This obituary is also archived at obittree.com